Seeing himself unfit to stay in Gon's life, he vows to guard Gon until he gets his powers back in 30 days. In doing so, Killua runs into Rammot, the Chimera Ant he torched a few volumes back pre Nen-awakening. This was a worrisome battle to say the least, as one of the fiercest battlers in this manga was frozen by fear by a manageable opponent. Killua's willingness to protect Gon prevented him from running, but his conditioning from Illumi told him not to fight, effectively making Killua a punching bag.

This was the merely the surface of Illumi's influence. When reaching a breaking point - from "run or fight" to "live or die" - Killua found a hidden Nen needle placed in his head by Illumi. After removing the needle, Killua returned to savage mode and started the beginning of what is to be his Chimera Ant rampage. RIP Rammot. This is some tremendous development of an already endearing character, and this gives several new pathways for Killua to grow and his relationship with Gon to development.

Though we're not at the summation of their relationship, the stakes are now much more than one child helping another find his dad.


The dynamic has shifted dramatically, and one can sense tragedy coming at any moment. Whether or not Killua really does end up leaving Gon, his actions from here on out are perhaps the most deliberate of any character. It's a sober reminder to the reader that these beloved relationships, just like in real life, could one day end. Cherish them when you have them. Mar 18, Malon rated it it was ok.

Hunter x Hunter has always been a sort of creative stream of consciousness. Where we go from one outlandish idea to another. But usually there's some sort of sense of purpose behind it all, or at least building towards something. But there were moments in the volume where I legitimately felt like my time was being wasted.

And why are there these weird semi-solid patches of black to censor the some of the violence? Either show it or have the violence be implied out of frame. This is the worst of both options. And there's potential for interesting stuff. I love the conflict within the Chimera Ants and their changing power system. Not only that, but the ants spreading out from their base is catastrophic. It could be apocalyptic. These carnivorous beasts with no regard for human life are spreading across the land like ants from a crushed anthill.

And these things are stronger than some of the most powerful humans in the world. If they aren't contained quickly, this could mean the end of humanity. 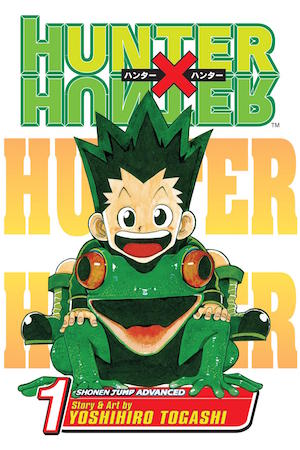 But it's not a simple black-and-white morality. The ants view humans the same way we view real life ants. And humans have inflicted violence upon ourselves that is worse than what even the ants have done. So how can we justify exterminating every ant when we have done worse ourselves? Meanwhile, these creatures are slowly developing a sense of humanity, valuing themselves as individuals but still trying to make self sacrifices for the good of the collective. They give each other names and want to baby the newborn king. Even the least human of them, the queen, isn't a one note villain.

She wants her species to survive like any animal does. She just happens to be higher on the food chain then us. And she cares deeply about her son, moreso than she cares about herself. So we've got an interesting conflict with compelling stakes and an incredibly creative premise. So can somebody explain to me why the hunters responsible for taking care of this are dicking around.

They know things are quickly sliding downhill, getting exponentially worse as the ants spread out. So why are they just dragging their feet and meandering between meaningless exchanges? Why is our time being spent on a throwaway dead-end dating scene? The story could go into a fantastically interesting place, but we're just in a holding pattern of wasting time. Maybe things will pick up now that we're heading towards some sort of collision. I certainly hope so. May 17, Brandon rated it really liked it Shelves: mango-comix , humanity-fuck-yeah , fantasy , existentialism , psychological-fiction , sublime.

Took me long enough, but I just realized what I love so much about Togashi's bad-health-induced art-style: it reminds me of the "classic" look of Tezuka's manga!


Osamu Tezuka's artwork began with a cartoonish manga style, which gave way to more realistic proportions for human characters when he began to write more "mature" stories. His figures retained some of the simple features of his cartoonier works, creating a unique sense of charm with the contrast between somewhat-simple art an Took me long enough, but I just realized what I love so much about Togashi's bad-health-induced art-style: it reminds me of the "classic" look of Tezuka's manga!

His figures retained some of the simple features of his cartoonier works, creating a unique sense of charm with the contrast between somewhat-simple art and darker writing. Togashi is quite similar, especially as the Chimera Ant Arc develops further into a grander-scale war story, and his back problems cause him to sketch out rough designs that would be presumably quite easy to draw later on. Gon was always meant to recall the child Kid Goku from the earliest chunk of Dragon Ball.

Togashi's style has evolved to simplify the design further for dramatic effect. Gon's eyes already lack irises, instead just being pitch black ovals, but Togashi can develop the atmosphere for certain scenes to convey a deep, unsettling sense of -coldness- in Gon's eyes Killua is meant to look simple like his best friend, but can also show a drastic change in personality if Togashi only avoids shading in his pupils, showing his bloodlust.

The Chimera Ant King is born and immediately goes on a rampage, killing and eating humans without abandon greatly recalling the initial horror of Imperfect Cell, one of my personal favorite shonen action villains. One of the Queen's most loyal subjects, Colt, teams up with the humans to defeat the King.

Netero begins preparations to battle the Ant King himself, as the strongest Hunter. Gon and Killua see what Neferpitou has done to Kite's body. Gon gets fucking pissed, setting up an immense battle with Pitou. If I wasn't already in love with this arc from its very beginning, I certainly am now. People weren't fucking around about the North Korea stuff Jan 25, Diana Lynn rated it really liked it Shelves: manga.

Alright guys Meruem is here. This book amped everything back up again as we are seeing our heroes grow and get ready to fight. There was a lot of action to be seen her and some awesome new abilities from our new heroes and villains. I loveeeeee this arc. Meruem might be one of my favorite characters in this series and we are just scratching the surface of his power. Other than that, we had some LOL's with Palm and some cool fights with some of the ants leading up to what is next.

I can't wait. Aug 23, Yasmeen Elnahass rated it really liked it Shelves: japanese , manga. May 13, Kathleen rated it really liked it. I've read this one before, but forgot where I left off! The chimera ant saga is an interesting puzzle from both sides - our heroes are doing their best, and their antagonists are striving for their own goals. Mar 25, Henrietta rated it liked it Shelves: , manga-shounen.

Well, although the action slowed down, it doesn't mean that the volume isn't worth of reading. Until the very end of the volume we I'm avoiding the habit of doing spoiler so I'll give general thoughts of this volume. Until the very end of the volume we don't know what is the Hunter's chairman plan to fight the enemy, neither the enemy's plan. Meanwhile, Killua's only determination is to protected his uncovered friend until the 30 days period has runned out, but in the end of the chapter he'll find a way to solve this dilema for our delight rs. And what about Kurapika, Leorio and the genneihyodan?